This is the story of one of the largest rebellions by enslaved Africans in American history. It is also the story of historiography – how the past is researched, viewed, and written and spoken about.

What Do You Think? Questions to keep in mind as you explore this exhibit:

This woodcut, published in 1831 with a story about the Southampton Rebellion, was titled "Horrific Massacre in Virginia."
From the Washington Daily Intelligencer, November 7, 1831.
William Wells Brown escaped slavery to become a prominent African-American abolitionist lecturer, novelist, playwright, and historian. His book Clotel (1853) was the first novel written by an African American. Brown was on the anti-slavery lecture circuit at the same time as Frederick Douglass, who became more famous.

Here is where the stories about Turner and the Southampton Rebellion go in different directions:

A Virginia newspaper report at the time described Nat Turner as a “fanatic preacher,” “artful, impudent, and vindictive, without any cause or provocation.” It described the rebels as drunks and the property of slave masters who were “kind and indulgent.” (Richmond Enquirer, August 30, 1831). Because the reporters could not imagine that enslaved blacks would rise up and fight together, newspapers in Virginia and other states attributed different motives for what happened:

The papers also cited Turner’s ability to read, write and preach as problems. Shortly thereafter, North Carolina pass a law forbidding both enslaved and free blacks from preaching. (The Raleigh Register, 1 September 1831) (Laws had recently been passed forbidding slaves to learn to read and write, to prevent slaves from being inspired by the writings of such abolitionists as David Walker. Read Walker's famous Appeal.)

The historical account that has most shaped our understanding of Turner and the rebellion is The Confessions of Nat Turner by Thomas Ruffin Gray. In his pamphlet’s introduction, Gray claimed that he wrote down Turner’s words, “with little or no variation.” There are many reasons to cast doubt upon the accuracy of this account. Here are a few:

Gray’s Situation: Gray was a young white man who took it upon himself to interview Turner in his jail cell over several days before the trial. Down on his luck, he had gone from living on an estate worked by 21 enslaved blacks in 1829 to owning only one by 1831. He had studied law, but was not yet a practicing lawyer. He would later represent several of the Southampton rebels in court. Meantime, Gray had gambling debts to pay off, and he surely recognized the money-making potential of a publication about the sensational topic of the moment. As he stated in his introduction, "[this is] the first instance in our history of an open rebellion of the slaves” and “[it] has greatly excited the public mind.”

Though the interview took place ahead of the trial, Gray assured the public that “the gallows will speedily close [Nat’s] career.” He also reassuringly reported Turner’s lack of capacity: “the great Bandit’ was taken by a single individual…without attempting to make the slightest resistance…and begged that his life might be spared.” About Turner’s reasons for perpetrating “the most atrocious and heart-rending deeds,” Gray paints Turner as not very bright, his mind “bewildered…[and] corrupted.”

Because he needed to both horrify and reassure his white audience, his report contains contradictions. For example, Gray wrote that Turner’s actions were “not instigated by motives of revenge or sudden anger, but the results of long deliberation.” So it seems that Turner was intelligent and purposeful after all. And about his “kind master,” Gray quoted Turner as stating “I had no cause to complain of his treatment to me.” Such a statement is much more likely to come from a person in power than one who is under a master’s thumb for life.

Turner’s Situation: Turner had little reason to trust the white scribe to record his thoughts accurately. He had been passed from one white master to another since birth. All his fellow rebels had been killed by whites, as had many other blacks in the area. Had he wished to write a confession, he might have done so himself, since he was literate.

On the other hand, Turner may have felt he had little choice but to talk with Gray. He was now a prisoner facing certain execution within days. Perhaps he needed some human contact. Perhaps he hoped to leave a legacy, however inaccurately recorded.

Finally, there is another description of Turner, written 30 years after the fact, by a black abolitionist, William Wells Brown. In The Black Man: His Antecedents, His Genius, and His Achievements, 1863, Brown paints Turner and the rebellion in a very different light. Brown’s account depends on Gray’s, but, like much of the black community then and now, his Turner is a hero. He is highly intelligent and brave, a man who had been taught by his mother and inspired by God to release his people from bondage. He is “one whose history has hitherto been neglected, and to the memory of whom the American people are not prepared to do justice.”

At the end of this sketch, published during the Civil War, Brown wrote:

"Thirty years' free discussion has materially changed public opinion in the non-slaveholding states, and a negro insurrection…would not receive the condemnation that it did in 1831. The right of man to the enjoyment of freedom is a settled point; and where he is deprived of this, without any criminal act of his own, it is his duty to regain his liberty at every cost.

If the oppressor is struck down in the contest, his fall will be a just one, and all the world will applaud the act. This is a new era, and we are in the midst of the most important crisis that our country has yet witnessed.…Every eye is now turned towards the south, looking for another Nat Turner."

Thomas R. Gray’s Confessions of Nat Turner became the source for the 1967 Pulitzer Prize-winning novel of the same name by another white writer, William Styron. Most Americans who know anything about Nat Turner’s Rebellion know it from this book. The controversy around this novel is part of the above film, Nat Turner: A Troublesome Property, available at California Newsreel and for online rental here.

In 2016, a new movie entitled Birth of a Nation, dramatized first-time director Nate Parker's interpretation of Nat Turner's life and rebellion. The film, which won the Sundance Film Festival's Grand Jury Prize, can be streamed on Netflix, Amazon Prime, and Hulu. 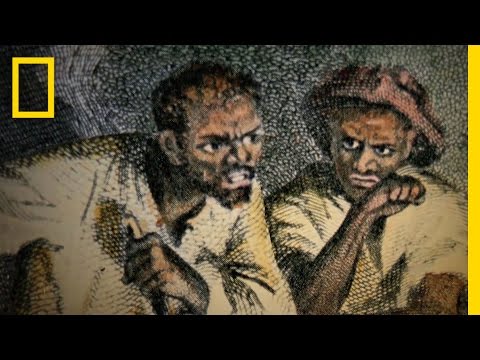 A 2-minute description of the Nat Turner Rebellion by National Geographic.

Skull thought to be Nat Turner's, now in possession of former Gary mayor, to be returned to descendants, by Javonte Anderson, Chicago Tribune

Six weeks after Nat Turner led the bloody slave revolt that left approximately 60 whites dead in 1831, he was hanged and decapitated.

History is not entirely clear on what happened to Turner's remains.

But a skull thought to be Turner's mysteriously appeared in 2002 when a local civil rights activist gave it to Richard Hatcher, the former Gary mayor, for his proposed National Civil Rights museum in Gary.

Now, after having the skull for 13 years, Hatcher will be presenting the skull to two of Turner's descendants at a private National Civil Rights Hall of Fame luncheon....

Read more about it here.